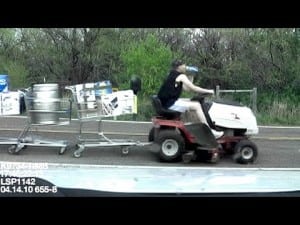 Seminole County DUI Lawyer – While the facts of this case are from a different state, the DUI laws in Florida allow for a DUI arrest and subsequent conviction under similar facts…..  A 49 year old man in Illinois has been arrested and charged with a DUI and he wasn’t even driving his car. His license had been revoked due to a prior DUI conviction and he decided that rather than take public transportation, ask a friend for a ride or walk, he would take his riding mower to the nearest gas station for some beer. To make matters worse, the man was riding his mower on a public road while drunk.

Police were notified by witnesses that the man was weaving in and out of traffic on the riding mower. Police tried to stop the man, but he drove into his front yard reportedly spilling Milwaukee’s Best along the way. He is now facing a second DUI charge and bonded out on $10,000.